Sandown Historic is one of the biggest and best race meetings of each calendar year, and 2019 was another fantastic installment

27 entrants lead by championship leader Philip Chester in his B GT V8 headed the list, Jim Robertson returned in his MG Midget Special, Geoff Pike came down from Sydney with his MG B Roadster while Jane, Tony and Richard Vollebregt made it mother, father and son on track together, not to be upstaged our invited British friends saw father and daughter, Keith and Alana Ondarchie in their Triumph Stag’s. With class championships to be decided it was bound to be an exciting weekend, only the weather decided to have other plans.  Seven ‘Group S’ MG B’s would add to the mid field battles and also who would finish 3rd overall for 2019.

MG Alley for 2019 features our supporters Cranbourne MG with their 2019 MG ZS on display and support from CMV Truck and Bus as our round sponsor.

In true Melbourne style Thursday was 31 degrees, but Friday, Saturday and Sunday wouldn’t get over 20 and rain scattered across the days.

Qualifying was scheduled for just after midday on Saturday, The big banger V8 field opened the account as Robin Bailey (B GT V8) set a 1:20.00 straight off the bat to initially take pole position, it didn’t last long as Philip Chester (B GT V8) put in a 1:18.30 to take the top spot. Vince Gucciardo battled through and set a 1:20.3 late in the session which placed him third overall. Paul Vernall (MG ZR) slotted into 4th with a 1:24.6 ahead of Keith Ondarchie who was first invited british in his Triumph Stag with a 1:26.7, Jason Holmes (MG ZR), Chris Gidney (MG ZR), Geoff Pike (MG B Roadster), Henk Zwartaveen (MG B Roadster) and Tony Vollebregt (MG ZR) rounded out the top 10. The only competitor not to successfully get through qualifying was Jim Robertson who only managed one lap and would start from rear of grid for race 1.

A ever so slight sprinkle of rain on the warm up lap threatened to make it a crazy opening race but the sprinkling stopped, Tony Vollebregt did not make it out of the pre grid and Keith Ondarchie was a late scratching due to mechanical issues. It was a drag race to turn 1 it was Chester vs Bailey, Bailey got the horsepower battle won and took the early lead from Chester and Gucciardo, Vernall, Holmes, Gidney and a fast charging Mike Wood (B GT V8) who ran from 11th to 7th on the opening lap while Pike, Zwartaveen and David Anderson (MG B Roadster) battled for the class win ahead of Greg White (MG B Roadster) and John Stevenson (MG TC).

On lap 2 Chester made a play for the race lead and got by Bailey, while Greg White moved into 10th getting by Anderson which also was for 2nd in class.  Sean Herlihy (MG F) got by Stevenson for 12th overall, Alana Ondarchie (Triumph Stag) made progress through the field as she got by Gordon Bunyan (Spitfire) and into 16th as the field progressed.  Darren Souter (MG B) started to make some progress as he got by Gary Bulmer (MG B) for 14th on lap 3 and Adam Ayliffe (MG ZS) made progress from 22nd up to 19th after finding his way past Jim Dodd (MG ZR) and Rodger Chapman (MG B).

The battle up front progressed as Vince Gucciardo got by Robin Bailey for second overall while David Anderson made a bold pass down the hill on Greg White using all the road available and some more. John Stevenson dropped two spots as Souter and Bulmer got by for 13th and 14th and Chapman and Dodd battled out for 20th with Chapman finding a way by.   On the last lap White got by Anderson again for 10th in what was a great battle for the whole race while Ondarchie passed Stevenson for 15th overall and after a quiet race Richard Vollebregt moved into 17th getting by Gordon Bunyan on the run to the flag and setting his fastest lap of the race on the run to the flag.

The field crossed the line with Phil Chester taking the win from Gucciardo, Bailey, Vernall and Holmes.

A strong 25 car field lined up for race 2, the field set off and Chester lead Gucciardo, Bailey, Vernall and Holmes into turn 1. Michael Wood moved to 7th off the line as Henk Zwartaveen (MG B) stalled and would take off last, Shirley St John Cox in the TR7 got a good start and was up to 20th while Jim Robertson progressed from the rear to be up inside the top 10 heading up the back straight.

As the opening lap came to an end Robertson was into 14th and Sean Herlihy (MGF) was up to 11th overall making strong progress. On lap 2 he went backwards as he dropped to 15th behind Souter, Bulmer and Richard Vollebregt while Ian Cowie (TR8) got by St John Cox for 20th place as Henk Zwartaveen was into 22nd as he tried to recover.

The field settled in for the remainder of the race, Robertson progressing up to 8th place behind Wood as Geoff Pike came to a halt after a strong start running as high as 8th early on.  Alana Ondarchie was the next into pit lane with oil pressure problems, Ian Cowie also came in with a problem which would see him retire.  Up front Bailey made an attempt at a pass into turn 1 on Gucciardo, running wide allowed Gucciardo back past as Greg White also found a way past Anderson for 10th overall as Herlihy moved up to 14th and Zwartaveen continued his run now up to 17th overall.  Ayliffe in the ZS made progress to move into 18th ahead of St John Cox as the final lap began.

Chester crossed the line for the win ahead of Gucciardo, Bailey, Vernall and Holmes the top 5 while Anderson got back up by Bulmer for 11th and Zwartaveen made a late run to finish 15th.

And the heavens opened as the rain started to fall, about 30 minutes before the race it was quite heavy, it eased as the field were set to head on track but that was enough to turn a few people off and just 16 cars hit the track for the season finale.

Both Chester and Bailey elected not to start, Gucciardo the sole outright V8, Mike Wood another to not take the risk. As the field lined up Gucciardo had the front row to himself ahead of Vernall who lined up on the second row on his own.  Gucciardo got a great start, Holmes slotted into second place ahead of Vernall, Gidney and Herlihy into turn 1 before Vernall got by Holmes, Gidney then moved into third place from Herlihy and Richard Vollebregt.  As the field got to the end of the back straight Anderson, Vollebregt, Bulmer, Souter and White were all in a line.  Gucciardo had stolen the show, opening an 8 second lead to Vernall on lap 1 from Gidney, Holmes and Herlihy the top 5.

As the race settled Gucciardo set a 1:39.3 while Vernall was next quickest in a 1:41.8. Gidney and Holmes close together as Herlihy and Anderson from Vollebregt ran for 4th overall.  Bulmer, Souter, White, Ayliffe, Zwartaveen, Dodd, Chapman and Jane Vollebregt rounded out the field.  Ayliffe had moved through the field and on lap 3 moved into 9th as he got by White, Vollebregt came to a halt between turn 9 and 10 as Vernall now moved into the 1:39’s in pursuit of Gucciardo.  Anderson then got by Herlihy for 5th while Chapman got in front of Dodd for 12th overall.  Zwartaveen set out to challenge White and on lap 4 found a way by into 10th place.  Ayliffe was on a charge getting by Souter and Bulmer and into 7th overall, the following lap Souter got by Bulmer for 8th and Jane Vollebregt and Jim Dodd battled for 13th place.

Vernall was now closing on Gucciardo having closed the gap from 10 seconds down to 2 seconds with two laps to go, as the pair come into turn 9 they were side by side up front, the pair fastest laps .14 of a second apart. Vernall then went across the gravel trap at the final corner and Gucciardo cruised away to take the final race of 2019, a year that saw him take 3x outright wins.  Vernall finished second to Gidney, Holmes, Anderson, Herlihy, Ayliffe, Zwartaveen, Souter, Bulmer White, Chapman, Vollebregt and Dodd rounding out the finishers. 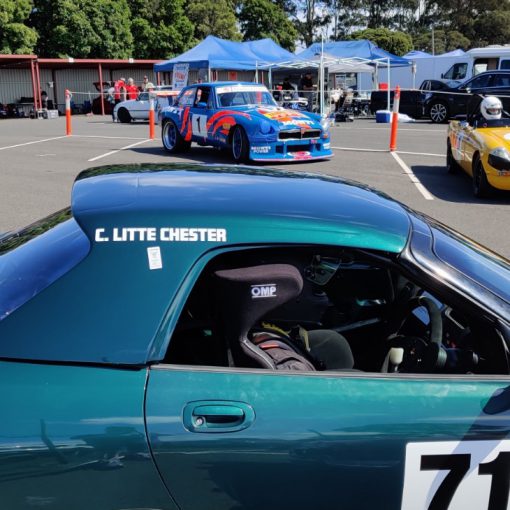 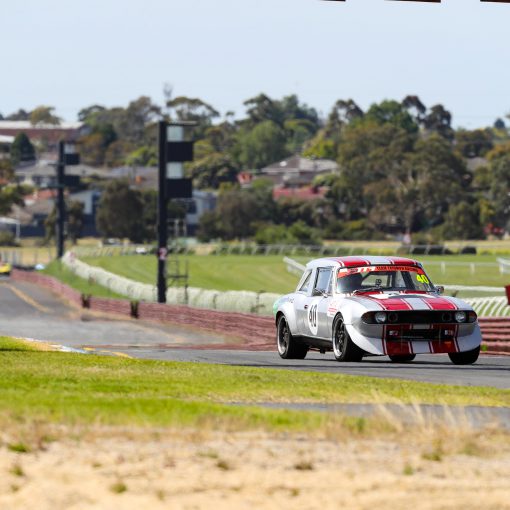 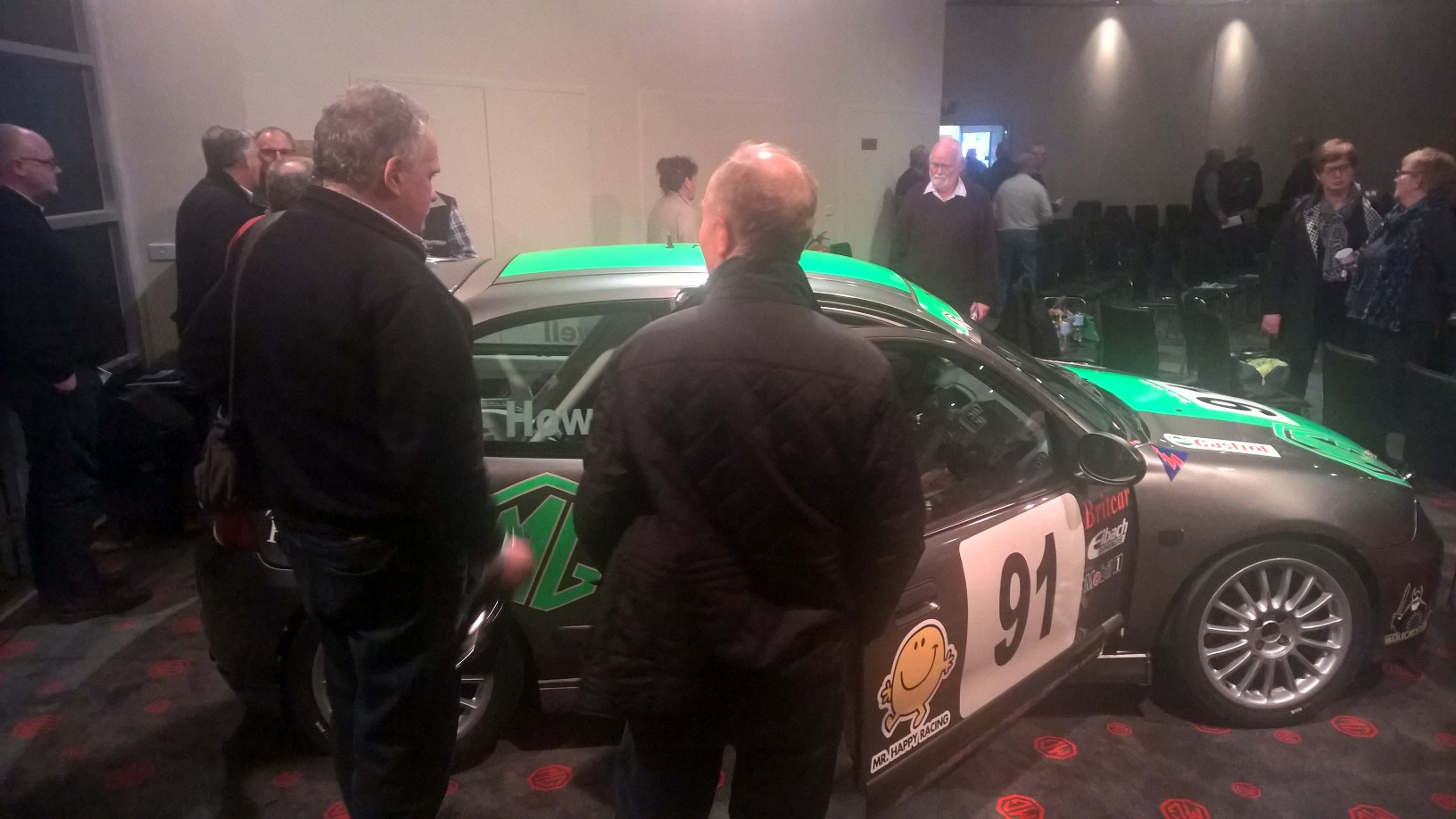