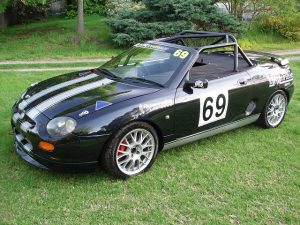 Built as one of the Australian MoPro MG F Trophy series cars from a brand new MG F Trophy 160.  Has never been registered for road use.  Australian delivery and 5315km on ODO. Stripped out interior, full CAMS roll cage, Velo race seat and in date harness. Additional features over and above original spc are:

Only selling as I am retiring from active driving 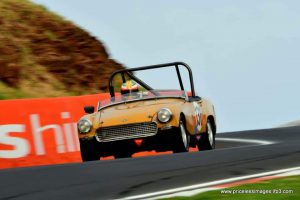 Rolling chassis set up – Mk3 Sprite as raced in Group S around Australia less mechanical’s.
Log booked for Group S, roller, has strong results at Phillip Island Classic, Bathurst in Group S, well known in NSW and a great project for someone looking to get into the category or build a nice club sprite.  Eligible for Invited British in MG Racing (winner of IB at Winton Festival of Speed 2018). Very quick car, only reason for selling is have built a new chassis and transferred the running gear. Car originally built by Simon Aram and presented including specifications, as per 1983 Australian Sports Car Championship at AIR.  Car has just had COD from CAMS issued and eligible as Group R, a great all round car that is reliable and fast, capable of running the biggest historic race meetings in Australia as well as MG Racing.

Car restored approx. 10 years ago, debuted back on track August 2009 and has since competed  in 49 race weekends with just 2x DNF’s and 1x DNS.  Ultra reliable and regular top 5 outright over the last 10 years, the most reliable Midget around. The most successful LE500 race car in the world.

Purpose built by Dreadnaught in Scotland as the first MG TF LE500 190 race car to comply with MGCC UK ‘Trophy’ series against ZR 190 & MG F/TF Cup cars. Built around the MG F/TF Cup but improved to make it more user friendly and easier to drive.  Proven results in the UK MG Trophy before being imported and campaigned locally by Cody Hill with numerous class win’s and lap records before being purchased by myself in 2015.  The car has had no expense spared in running it, proven with its strong results on track, 3rd outright in 2016, 2nd outright in 2017, the results speak for themselves.  Car presents to a very high standard in striking ‘trophy yellow’.  Car is turn key, ready to go for 2018 and capable of class wins and top 5 outright Ex Championship winning ZR in the hands of Jason Holmes. The car has done very limited miles of the last couple of years due to a new project but has just had a freshen up and completed a successful test day. Plenty of spares and track side help available. Will also do a package deal with trailer (see parts page for details) Do you want to win a competitive championship in 2018? This is your car!
One of the last cars to leave the factory in 2004, this car has already proved ultra-competitive in its limited Australian appearances.
PI/R1/2012 – 3rd OVERALL! All good bits/spares/help. $23,500. Really serious buyers only.
VIN# SARRFLNME4D000319 MGB V8 Roadster. Championship winning car 2005 and 2006. This car has always been immaculately maintained and extremely reliable. Serious offers will be considered. Please, no time wasters. Contact Neil on 03 9791 8777 during office hours. Fully Restored Historic 1967 MGB Mk1 Roadster – qualifies for Group T and have all history. Car is restored to Oct 1979 spec. Everything has been rebuilt and have extensive photo history of restoration and history. CoD paper work is filled out however I have to consolidate project and it has to go. Various MGF and MG TF Cup Cars as well as MGF trophy Cars available for sale. Many of these cars were part of the original MG Trophy Series in the UK and continue racing in Australia today.