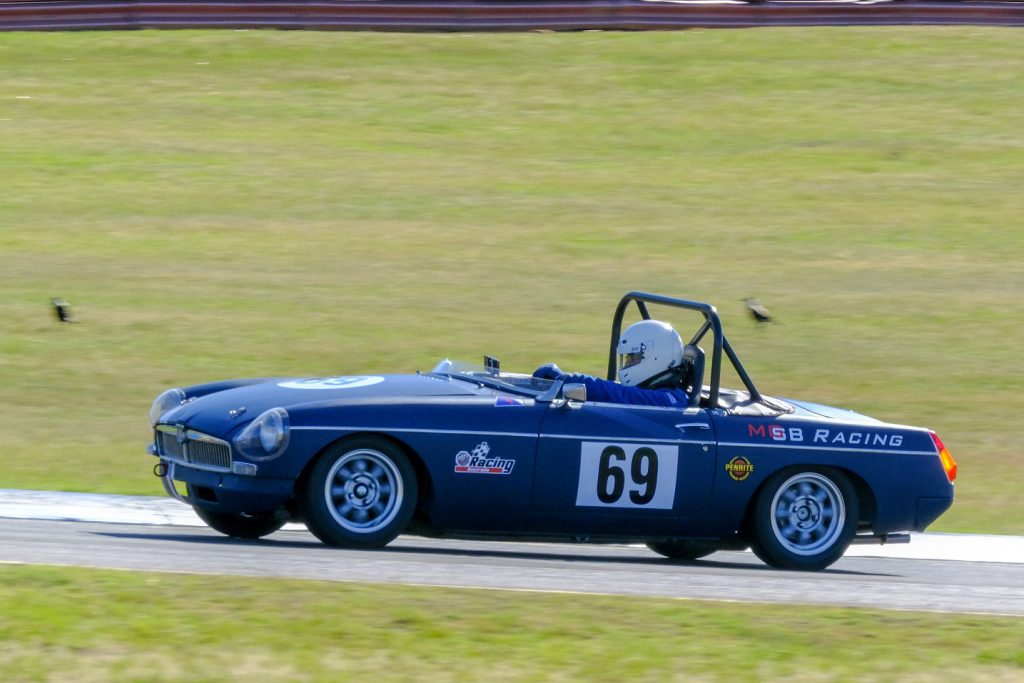 Darren Souter has only been playing in MG Racing for a short time but he has already made an impact.  Darren’s passion for the series and people has lead him to join the 2019 MG Racing committee and it was a great chance for captain Paul Vernall to chat with Darren and introduce him to the wider series!

Darren is a car enthusiast down and down, his garage filled with 60’s classics, his race car just one, a 1969 MG B Roadster which is log booked for Group Sb which he build up from the ground at home.

“I spend most weekends either in the shed playing with cars or at our holiday house, so cars are a big part of my life and racing is now another fun chapter to add”.  The garage also houses a 1969 Mini, “Kim and I bought the Mini and built it up, bit like the race car but it is for the road.  Usually Saturday of each meeting you will see the white Mini sitting in the MG paddock but I also have a 1963 Falcon in the shed as well, same story, built it up from the ground a while back”.

Darren has spent most of his life working like many to bring his kids up and spent most of his time at the holiday home but now they are somewhat self sufficient “its time to play” he comments.  “I have been playing with cars for years, but racing is a bit of a different beast.  It was a bit of a different path, I really love the challenge of working on the car and making it faster and enjoy helping others.  The first time I actually set foot in a race car was doing my OLT at Sandown…. It was one hell of a learning curve!”

Darren has been a solid competitor during his debut season picking up 3rd in Group S within MG Racing in his debut year, “I was amazed when I got announced at the awards dinner, didn’t pick it, and it was really cool to feel I achieved something so quickly.  I mean I don’t do it for the trophies clearly!”

So let’s take a step back…. how did we go from a 1963 Falcon and 1969 Mini to a Group S spec MG B race car?!  “Well funny that, I wasn’t really looking to go racing, it’s one of those stories these days… Basically I was reading a buy/swap/sell book at the supermarket one day and there was a small advert and it read something like ‘MG B, Ideal for restoration or race car’ and I thought…. yeah, a race car, that sounds like fun!”  The more he thought about it the more it seemed a great idea, “the kids were off our hands and so basically 2 1/2 years later I was sitting on the dummy grid at Sandown and thinking… what the heck have I done mate, it was like that.  Now I love it!”

and How did MG Racing come into this… “originally the plan was to race Group S… well as I call it now, ‘Historic Carrera Cup’ for valid reason and basically I got talking to some MG Racing people along the journey of building the car, so over the last 2-3 years and a number of people pushed me to MG Racing and it proved to be a smart decision with what I know now.  Everyone said it was more inviting, more friendly, so here I am… and loving every minute”.  Getting someone to go racing is hard, keeping them engaged in the category is sometimes the hardest part… so what will get him back for another season and going forward…?  “The atmosphere of the whole club is very enjoyable and most of the people are so willing to help out with advice and guidance and anything.  I am the new guy on the black and I am asking silly questions to some people I am sure, but everyone helps.  Like how to drive a track, why my lines don’t line up or why everyone uses this bit of road through to set up of a car, That was a whole new world and I didn’t realise how it affected things.  I really appreciated a lot of help people gave me in that sense this year it helped me a lot and the fact there are so many classes on track makes it interesting.  I am really keen to get back into it in the new year and I am really looking forward to going to Sydney Motorsport Park next year”

So what’s the future look like for Darren, “I have a few years of getting this car right and messing about but I build the car with the intention that if it get’s too expensive to run the B series engine I can look at building a cost effective V8 or something so who knows.  For now its have fun, enjoy the people and learn!”

there are plenty of people behind Darren getting him up to speed, “Really lucky some people have got stuck in to help me out and it’s made a big difference, Rodger Chapman and Dave Anderson have been instrumental. The last 6 months their advice to get the car on track, log booked, my licence and what to do at the truck has made it all happen! My brother and sons turn up to help out and make it a real family affair and Lorna who is there as well.  Of course definitely not last is my wife Kim, who never complains about the hours in the shed since I started this journey and she is always at the track to support as well and you cant underestimate how much that makes a difference”.

Joining the MG Racing committee was a step that he didn’t expect but has embraced, “I guess it’s a bit odd to think I am new but involved like this but Kim agreed it’s a chance to put in and help grow the category that has already given to us.  I think it’s also great to get some more insights into the class and learn more history but I am very much taking a look and observe approach, I am definitely not a 5 minute expert!”

Darren summed up that it’s been an awesome couple of years so far and he is really keen to kick on in 2019, he is now the MG Racing Classic & Group S representative so reach out to him if you want to discuss anything related to the class. 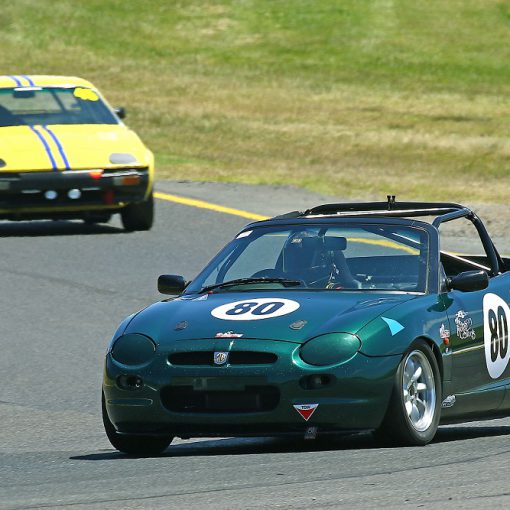 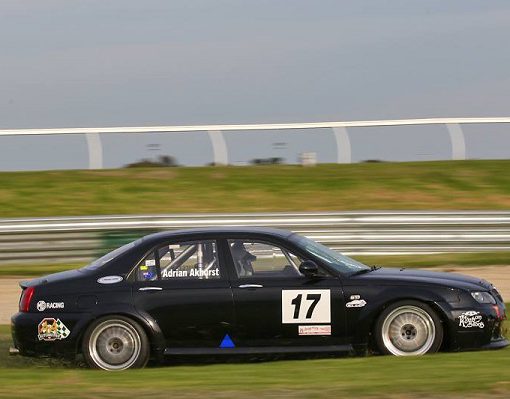 Adrian Akhurst will make a return at Sydney Motorsport Park as he assess a part time campaign for the rest of 2019. […]