MG Racing Australia’s strong start to 2019 will continue with the biggest field assembled for Round 3 at Sydney Motorsport Park.

Despite a few key competitors being forced to miss the round such as Robin Bailey with family commitments, a strong field representing every class of MG Racing will take to the Sydney circuit for the first time in MG Racing’s history and no less than 9 different models of MG will be competing from MG Midget and MG B through to MG F and ZR’s.

The stars of the show in the outright class will be reigning champion Phil Chester who’s car will return to it’s home with prior custodian Peter Bennett running the car out of Sydney for 20 years. Chester will have to fight off a charging V8 pack including Vince Gucciardo, Ben Muller, Rhys Howell and a returning Adrian Akhurst.  Showcasing the history of the MG brand we have an MG B, MG C, MG ZT and MG SV-R V8 powered vehicles.

No less than 14x four cylinder MG B’s will battle for Classic / Group S class honours with leading MG B’s from Victoria in David Anderson, Peter Rose, Michael Herlihy and more taking on the local’s in Bob Rowntree and Geoff Pike leading the local charge and 13x MG’s will be eligible for the Group S sub class.

In other interesting entries 4x MG Midgets all from NSW and 7x Invited British Triumphs (and a single Lotus) will join in the part with 6x MG ZR’s including the factory MG ZR Judd of Andrew Howell which was a factory built race car and Paul Vernall’s ZR Turbo.

Invited British battles will be lead by Keith and Alister Ondarchie and stalwart Ursula Weidenmuller taking on husband and wife duo Sue Tahir and Glen Coutinho from NSW.

A full entry list will be revealed in the coming days 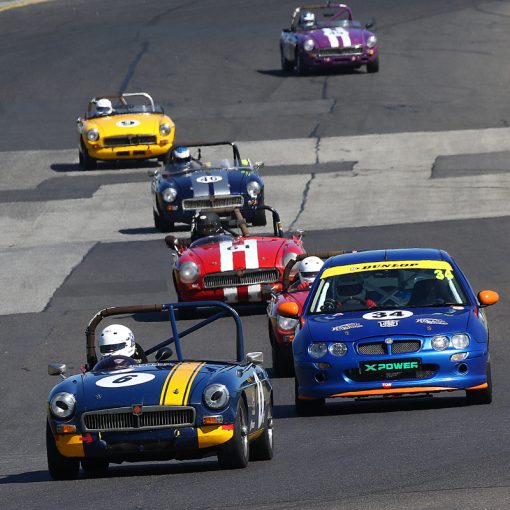