Round 1 saw the running of the annual Peter Lee Memorial trophy for the first four cylinder MG B home which went to Peter Owen in his Group T Historic log booked MG B Roadster. Owen has been a longtime historic racer across his Ford Escort historic touring car, and more recently his MG B.

Gary Bulmer (MG B #4) briefly ran as the fastest four cylinder MG B in race 1 before a grearbox issue ended his weekend. Garry has also purchased the ex Howell family MG B that Rhys Howell has campaigned on and off for the last 6 seasons. The car is well known to be the fastest four cylinder MG B in Australia and Bulmer plans to contest the 2022 championship in the car. “This car (Yellow #4) is just such a nice car, but the limitations on the classic/Group S don’t allow enough tinkering. It took me a while to commit but what interests me most is I can play with it, the suspension, brakes, engine can all be played and that excites me that it will take a while to get my head around, but I can play with it at each track and the engineering enjoyment it will bring”.

A notable competitor who was absent from the opening round was Vince Gucciardo. Gucciardo will be on board for Round 2 at Winton in a slightly refreshed livery in his MG C V8. Gucciardo was planning an all out attack on Phil Chester in 2021 but has conceded this might not happen now. “It’s pretty hard to claw back three wins against no points but we will see how the next few rounds go, we have done a few updates on the car in the off season, and the livery has had a tweek so fingers crossed for a good year” commented Gucciardo

Our partnership with Cranbourne MG has expanded for 2020 with the partnership expanding to the ownership umbrella of Booran Motors which includes Cranbourne MG and Dandenong MG amongst other brands including VW, Skoda, Hyundai, Isuzu, Nissan, Kia, Mitsubishi and more! 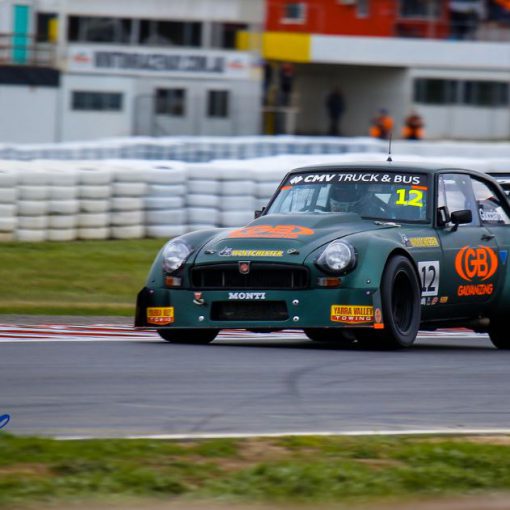